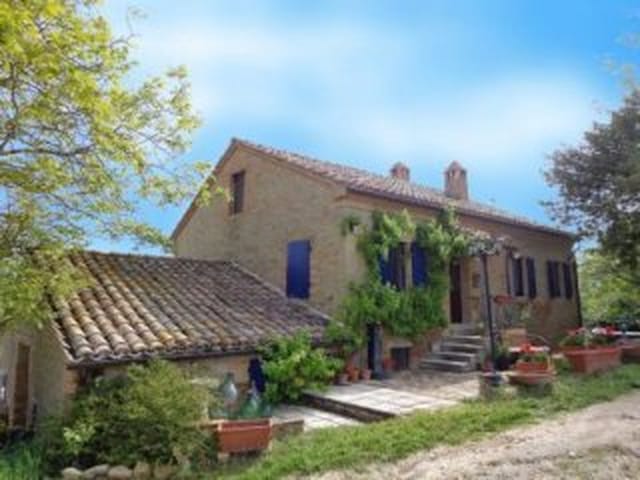 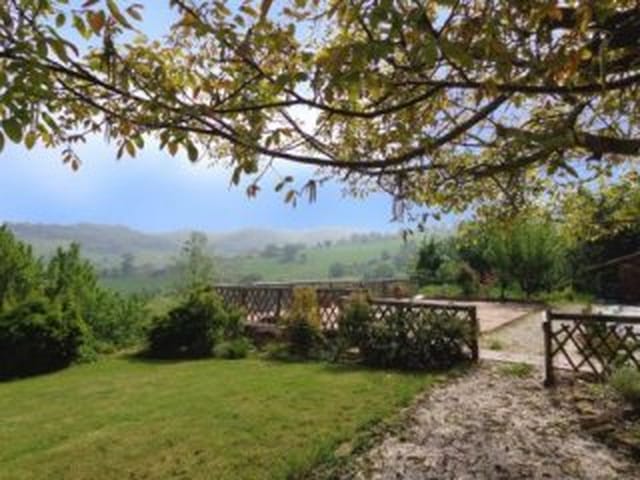 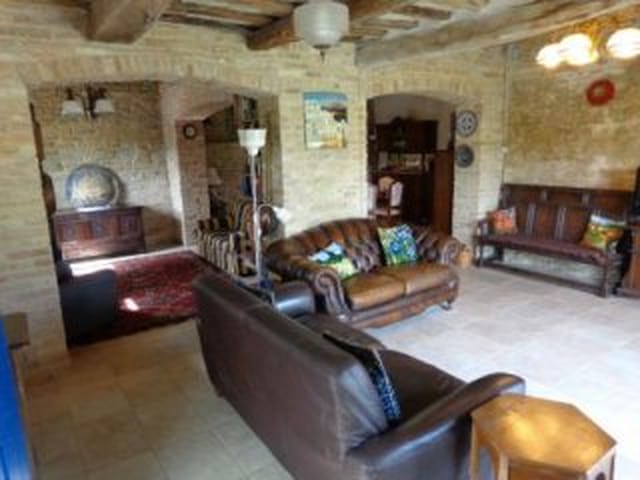 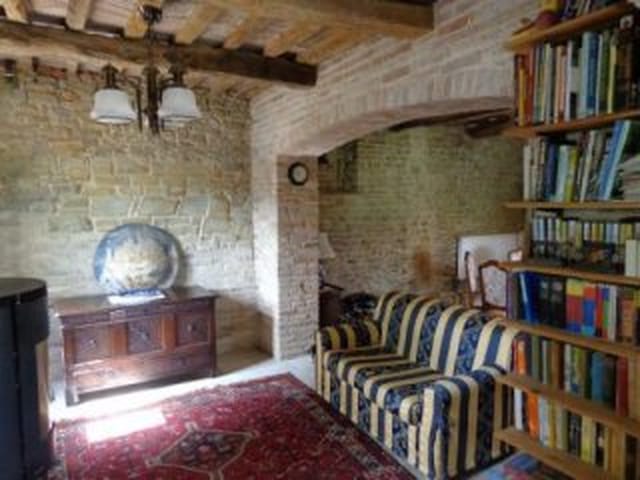 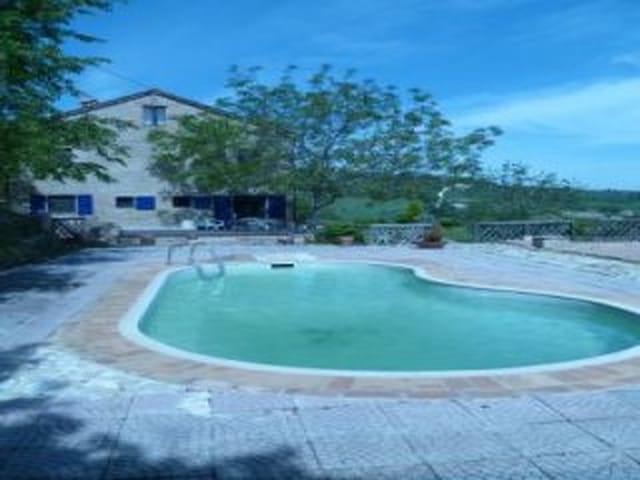 Charming restored farmhouse with a total living surface of 350 sqm immersed in the green countryside of Le Marche with a flat courtyad sizes 3000 sqm and a garage sizes 65 sqm in the basement (to be possibly be converted), and wondeful swimming pool and panoramic terrace sizes 30 sqm.
The house has a ground floor of approximately 150 square meters currently used for the most part as living room, sitting area, bathroom and direct access to the garage / storage area. (convertible into guestrooms). On the first floor, accessible by staircase, is positioned fitted kitchen, three double bedrooms (one with en-suite), office (convertible into an additional single bedroom), bathroom and staircase with a balcony. Second floor attic where are housed two additional bedrooms (with original typical tiles).
The restoration has mantained the rural style and the original features, such as: cotto tiles floors, old stone and bricks walls, wooden beams and old bricks ceiling and roof, wooden windows and shutters. The property is equipped with a surrounding garden of 3000 square meters, mostly flat where was built a comfortable swimming pool (bean-shaped) with large sun terrace.
As mentioned the property also has a garage of 65 sqm easily converteble into an annex or more rooms for guests and friends. The house, located at the end of the road has great privacy thanks to the many tall trees and fruit and impressive view of the surrounding hills. Just 1 km away from the medieval town center.
Asking price € 389.000, negotiable!
Colmurano, a quiet and laborious village, is situated on top of a hill facing the Sibillini Mounts. It welcomes visitors inside its ancient walls, bringing tourists back to ancient atmospheres.
In fact, in addition to the important archaeological site discovered near the village, the historical traces are evident in its medieval structure, in the ramparts which strengthen the walls and in the tower to defend the port of San Rocco.
Different and very interesting architectural works worthy of note, as the sixteenth century church of the Santissima Annunziata which has a quadrangular room with three altars and preserves a splendid fresco of 1560 attributed to Andrea De Magistris. The facade is characterized by bowls of brightly colored majolica colors and a beautiful portal driven by a succession of arches decorated advancing towards the road. Equally valuable is the octagonal church of San Donato, built in 1803 to replace an former church, which maintains the ancient shrines.
Near Colmurano, above a hill between two streams, lies the ancient Franciscan monastery of Monte Nereto. Built in 1200, originally dedicated to St. Peter later became the church of the Madonna of Loreto, with the erection of an altar inspired.
This wonderful medieval village supplies with all sports facilities (sports hall, tennis courts, football and bowls), as well as outside served areas and many forests and trails that allow visitors to enjoy the calm tranquility of this pretty village .
Many are also the artistic, cultural, gastronomic and sporting activities that take place in Colmurano during the year: the cheerful festival of the first of May as the rich Typical Products Exhibition (June), the lively review ArtiStrada (which in the month July gathers musicians and saltinbanchi from every corner of the world and is associated with unusual Pizzagra, the feast of pizza and the traditional feast of the patron saint (August), the beautiful and articulate Magicabula (settembrina week dedicated to children sponsored by UNESCO ) and the classic autumnal Castagnata in Piazza.