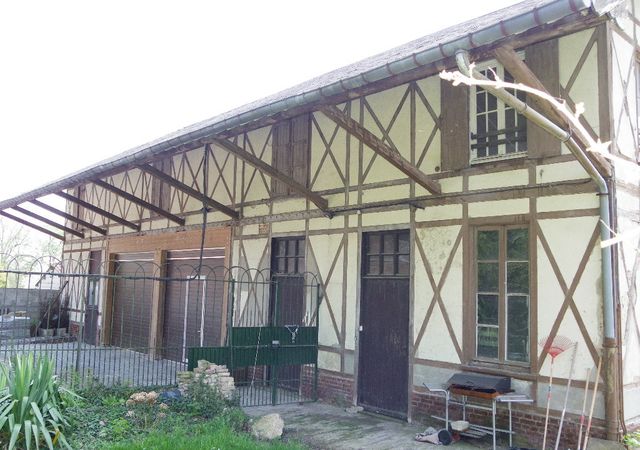 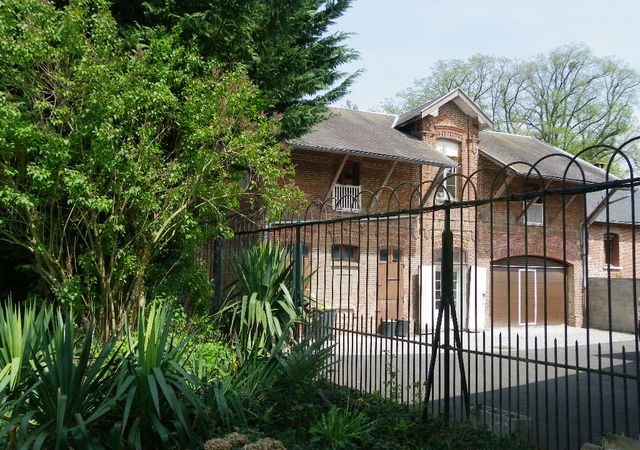 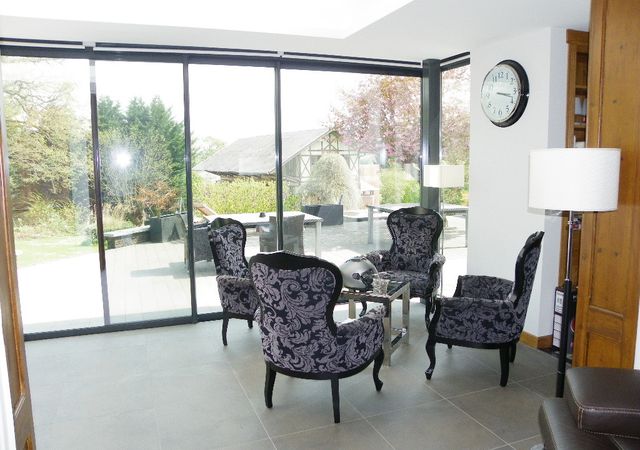 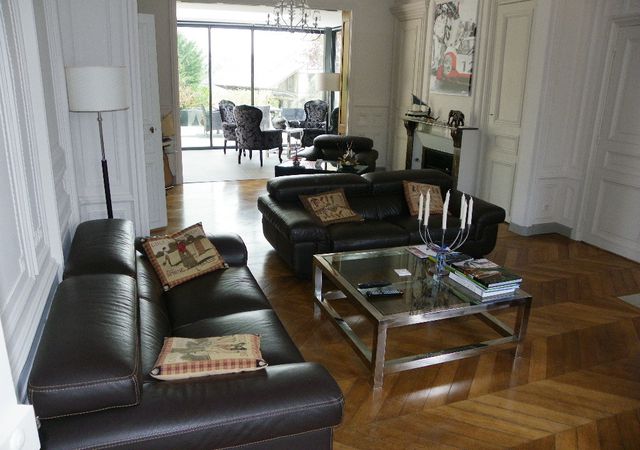 Ideally located, close to the SNCF station and 10 km from the A 29 entrance.

Nestled at the entrance to town, the house appears around a bend. Imposing, it immediately catches the eye. Red bricks, white shutters, porch protected by a marquee decorated with wrought iron elements. Moreover, the bourgeois residence proudly dominates the landscape, surrounded by trees and protected by a perimeter wall, the heights of which are dressed in carved stone decorations.

Once through the imposing portal, the surprise is sizable. If the facade that overlooks the street may seem a little austere, as if frozen in its history, the house offers, on the park side, a whole different vision.
Set in the heart of a haven of peace, the building blooms among the tended trees. Among the remarkable species, an impressive redwood more than 5 m in circumference, hundred-year-old oaks. Finally, at the end of the park, stand the old stables.

The paved courtyard leads to an ultra contemporary cube pierced by large bay windows, grafted onto the rear facade in 2009, on the occasion of the purchase of the residence by the current owner.
Bordering the cube, hoisted on metal stilts, a wood fiber terrace stretches the length of the building.
The imposing stone staircase has been mischievously attached to the terrace, in order to fully integrate this contemporary breakthrough into the beautiful centenary.

The dive into the first living space is immediate, it is in fact the interior continuity of the terrace, open to all the rooms on the ground floor. The feeling of the outdoors is further enhanced by the glass roof which allows the sun's rays to come and caress the occupants. Revisited by the desire of the current owner to make it a current home and not a museum.
The dining room, decorated with a huge table and framed by large Louis Philippe furniture, opens naturally onto the kitchen.
The second space gives pride of place to the aesthetics of the mid-19th century. Moldings, real and false doors allowing perfect symmetry, marble fireplaces adorned with the famous shells ...

The building, which concentrates astonishing combinations of styles and eras, then gives way to a central corridor. Traditional cement tiles, dark wooden staircase, this space between two styles skillfully links the main body with the extension of the house, added at the beginning of the 20th century.

On the first landing, the bright white walls with discreet moldings are sufficient. Behind the first door appears the current owner's bedroom. The contemporary decor of the place casually turns away from the aesthetics of the early twentieth century that had left a few moments earlier. Framing of the doors and the bed in varnished veneered oak, matching chest of drawers, large storage units decorated with mirrors ... only the essential fireplace reminds us that we are indeed in the archetype of the bourgeois house.

Sober, the walls are irreparably adorned with white, leaving the touches of plum and brown on the curtains to discreetly enhance the tones of the room. On the side, a private bathroom emerges.
A cozy nest, the room gives pride of place to a hammam shower enveloped in the shimmering mosaics of the artist from Amiens. The wood supporting a double basin skilfully completes the decor.

As for the children, the will of the owner is fully respected, the house is fully anchored in the 21st century. Moldings, black marble fireplace and windows decorated with engraved decorations
One floor higher, the narrow maid's room has been replaced by two large colored children's rooms.

The black marble fireplace and the imposing frame. “Only the central beam is solid oak, the rest is made of less noble and lighter wood. It was a common practice at the time, we favored the outer shell, neglecting inconspicuous elements. "